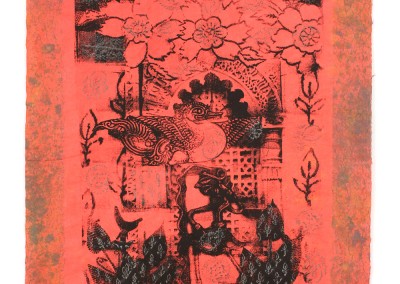 Nicholas Hill is a painter and printmaker living in Granville, Ohio.  He is Professor of Art at Otterbein College where he served as Chairperson of the Department of Art for ten years and currently is Director of the Frank Museum of Art.

Mr. Hill received grants from the Ohio Arts Council, the Greater Columbus Arts Council, The New York State Council on the Arts, and Artists Space – New York City.  He has been granted two international residencies in Dresden, Germany.  Additional residencies awards include the MacDowell Colony, New Hampshire, and the Virginia Center for the Creative Arts, and the Ragdale Foundation in Illinois.

Nicholas Hill was commissioned by the Ohio Arts Council to create a suite of prints that were presented as part of the 2005 Governor’s Awards for the Arts in Ohio in celebration of the 40th anniversary of the Ohio Arts Council.  In 2006 he traveled to Japan as part of a sabbatical research project.  Presently three of his recent prints are on exhibit in the Ohio Governor Ted Strickland’s offices in Columbus.